Many have debated the origin of this expression- I don’t really care. I’m not usually so callous with language. In fact I’m rather a huge fan of how things are said and what meaning they carry. But I feel like with any art, what is observed from one person to the next can be different.

All I know is that I’m a fan of this expression for describing a boat, ship, or craft that has had lots of care put into its appearance and functionality.

I have acquired a 16’ sloop. Wooden hull with fiberglass sheathing, gaff rigged, with lovely lines. She is sound and just needs cosmetic work: sanding, painting, and a small amount of patching up fiberglass on her port rub rail.

My goal is clear to me- restore her, get her into the water and explore the lake. Maybe even coastal sailing after I have the feel of her and confidence to match.

Late summer/early fall for initial refit completion and launch. To be certain- she is, as many are, a work in progress and I can see this work continuing on longer than this deadline. 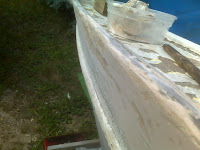 The rot of ages. So the first day was spent building up the rotted area (starboard rub rail) some of the hull itself looked like it needed some love so I applied some structural filler. While I was doing this my good friend (whom in order to protect the innocent (HA HA) shall be called Edwardo from here on)... so as I was saying Edwardo was on the port side scraping loose paint. We put in a good couple of hours and then suddenly I heard a ripping sound followed by "Don't mind me or that horrible sound you hear" Edwardo was trimming out some delaminated fiberglass. MMMMMM fun. Well thankfully we found it then and as it so happens I've discovered that fiberglass is actually fairly cheap as things go- so trim away Edwardo! Just don't go too far with it- or I will have a raft and not a sailboat. Nice application of rot fix and should be ready for coating in fiberglass again.
I've included a photo of the area that was formerly rotten (starboard rub rail) and now pretty well built up. It took a while to dry for the next layer, but once dry I was able to fair it out nicely.
Posted by Robear at 4:30 PM